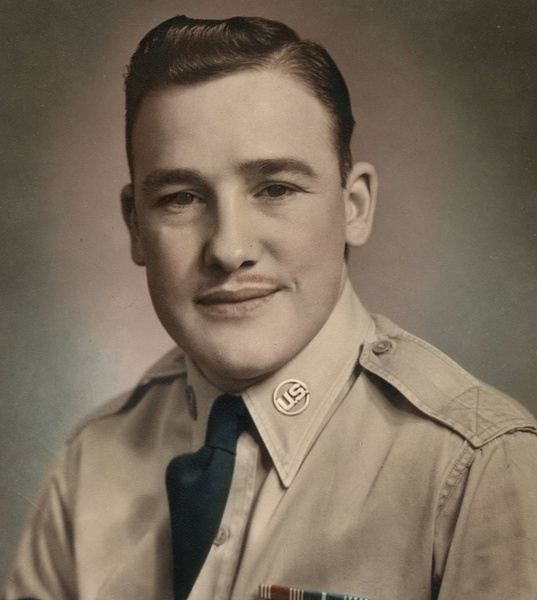 Hugh was born March 8, 1928, in Stanberry, Missouri, the son of George Willis Butrick and Lula Mae (Fults) Butrick. He attended the Stanberry elementary public schools and graduated from Stanberry High School in 1947.

Growing up, he made at least one trip to the west coast to help with the fruit harvest in Medford, Oregon. During this or another trip, Hugh remembered driving a car with his buddy until the car finally gave out, and they then pushed the now-useless car over a cliff.

In 1948, Hugh enlisted in the U.S. Air Force, stating that he was going to have at least some say as to how he served his country.

Hugh met Lucille Marie Schlenker in Stanberry, MO after she had traveled with family and friends from North Dakota to Stanberry to attend a church campmeeting conference. This began a journey that spanned more than 70 years together. Hugh and Lucille were married August 7, 1949, and made their home in Ogden, UT, where Hugh was stationed in the Air Force. Together, they had one daughter, Vicki, who was born also while Hugh was stationed in Utah. Not long after this, Hugh was on orders to go to Japan. On his way to Japan, three days out to sea in the middle of the Pacific Ocean, Hugh made the most important decision of his life, he accepted Jesus Christ as his Lord and Savior.

When stationed in Japan on the base where the Japanese had previously trained its kamikaze pilots, Hugh was baptized and associated with various ministries, including the Navigators, and worked as an office clerk and eventually became Chief Clerk. After four years of service and choosing not to make the military a career, Hugh was honorably discharged from the Air Force, and the new family moved to North Dakota. For seven years, Hugh ran Butrick’s Dry Cleaners in Kulm, ND. It was during this time that Hugh received and answered the call to go into the ministry. He sold his business and returned home in 1959 with his family to Stanberry to attend Midwest Bible College with the Church of God (Seventh Day).

After graduating, Hugh became the Pastor at the Church of God (Seventh Day) in Oklahoma City, OK, in 1961, and was there for 11 years and pastored that church on three different occasions. Hugh was also the Pastor at several other churches, including Las Cruces, NM; Eureka, SD; Kansas City, MO, during which time his grandson, John, was born; St. Paul, MN; Claremore, OK; Albuquerque, NM; and Roswell, NM. He also committed to a three-month missions trip in the 1960s to Ethiopia, Egypt, Israel, and Germany (including East Germany) and visited the brethren in the Philippines in the 1990s. Hugh would lead the song and worship, occasionally played his accordion, sang duets with his Beloved wife, Lucille, with their daughter, Vicki, singing along and on the piano. Hugh faithfully served the Lord and the church for more than 70 years.

Hugh was the most patient and friendly man you could ever know, qualities that were very useful at times while tending to the issues and concerns of those Christian brothers and sisters over which the Lord had graciously appointed him as their earthly shepherd. Described as a pillar in the church by others, Hugh would come at once if there was a need and loved the brethren but would also unapologetically confront sin directly and forcefully, knowing that any good he did was because the Lord had given him the right words to say or the right things to do at the right time, and it was the Lord who gave the victory and the increase. Of going into the ministry, he often said, “I did it for the Lord.” May we all have that singular focus in what we do and how we live our lives each day.

Hugh is survived by his daughter Vicki Butrick; grandson John Butrick; one brother and one sister, John and Mary; numerous nieces and nephews; and countless other family and friends. Hugh was preceded in death by his wife of more than 69 years, Lucille; his parents George and Lula Mae; and two brothers and three sisters, Willis, Earl, Margaret, Shirley, and Gayle.

Nothing was more important to Hugh than his faith in the Lord Jesus Christ. To the very end, he had a passion and fervor for being the Lord’s ambassador and seeing lives changed.

Visitation will be held on Saturday and Sunday, April 23-24, from 1-3 pm at Haut Funeral Home in Jamestown, ND.

Funeral Services will be held on Monday, April 25, at 1 pm at Haut Funeral Home in Jamestown, ND.

Interment will follow in the Alfred Church of God (Seventh Day) Cemetery NW of Jud, ND.

This is not the end, and we have the certain hope that we will both see him again in a resurrected and perfect body when the Lord returns and have the honor of spending eternity with him and all those of the household of faith.

CLICK HERE to view the recording of the funeral service.

To order memorial trees or send flowers to the family in memory of Hugh Burton Butrick, please visit our flower store.