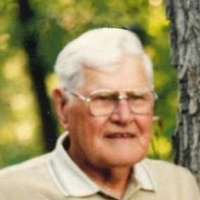 Herbert Herman, 102, formerly of Gackle and recently of Bismarck, N.D., passed away early Sunday morning, Feb. 11, 2018. Herbert was hospitalized in San Jose, Calif., at the time of his death. He was born on a farm south of Gackle on Dec. 24, 1915, to Jacob and Ottille (Roloff) Herman. His parents moved to Gackle when Herbert was school age. He graduated from Gackle High School in 1935.

After graduation, he joined the Civil Conservation Corp and was assigned to CCC Camp #2765 in Wishek, N.D., to build stock dams. The Camp moved to Camp Crook, S.D., where they did forest work making fence posts and telephone poles. In 1938 Herbert’s Camp moved to Fort Meade in Sturgis, S.D., where Herbert helped organize provisions for 27 CCC camps located in the Black Hills. He taught rural school in Logan County from 1938 to 1940. Herbert attended Valley City State Teacher’s College from 1940-1942 when he was drafted by the US Army after the attack on Pearl Harbor.

Herbert served in the US Army from 1942 to 1946. He received his basic training at Camp Wallace Texas. In 1943 he was transferred to Fort Stewart Georgia where he was assigned to Headquarters Company for the duration of his Army career. He did office work and was assigned the job of interpreter for the German POW’s at Fort Stewart. After the war, Herbert helped move the POWS to Fort Benning Georgia for transport back to Germany. Herbert was discharged from Fort McCoy Wisconsin in 1946 as a Tech Sergeant.

He returned to North Dakota in May 1946 and got a job as clerk in the Gackle Post Office. When the Postmaster left the job, Herbert was appointed acting Postmaster in 1947 and was permanently appointed by President Harry Truman in 1949. He held this position until his retirement in January 1981. Herbert served the U.S. federal government in his various jobs for a total of 41 years.

Herbert met Reva “MaryEt “Johnson in LaCrosse, Wis., in 1944 when he was on furlough and returning to Fort Stewart Georgia after visiting his parents in North Dakota. He was introduced to MaryEt by his Army friend John McConaughey and his wife, Gladys, who was a friend of MaryEt’s. The four were sharing expenses traveling back to Georgia. MaryEt was going to visit her brother who was stationed in Kentucky. Herbert and John and Gladys McConaughey were returning for duty at Fort Steward. From then on, a friendship and correspondence developed between Herbert and MaryEt and the couple was married Oct. 25, 1947.

Herbert and MaryEt shared a zest for life, adventure and travel which took them throughout the United States, Canada and even some world travel. They always wanted to see what was over the next hill! MaryEt passed away June 7, 1993. After her death Herbert continued to live in Gackle until he sold his home in 2012. From then on, he split his time traveling and “wintering” in California and “summering” in North Dakota.

Herbert loved sports and golfed well into his 90s. He was a Packers and Twins fan and loved Spring Training for baseball. Trips to National Parks topped his travel list. He became fascinated with family genealogy and researched the Herman and Roloff Family history and recorded his findings in two published journals. In later years he took up quilting and made charity quilts for children in need and military veterans.

He was preceded in death by his parents Jacob and Ottille, his baby sister, Hulda, his wife, MaryEt, his son-in-law, Charles, three brothers-in-law, three sisters-in-law and many family members and friends.

In lieu of flowers, the family requests memorials be made to the Anne Carlsen Children’s Center in Jamestown, N.D., and Emanuel Lutheran Church in Gackle, N.D.

A Funeral Service will be held Tues., Feb. 20 at 11 AM at Emanuel Lutheran Church in Gackle, N.D.

Burial will be Wednesday Feb. 21 at 2 PM at the ND Veterans Cemetery in Mandan, N.D.