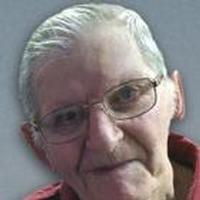 Harold Lunzman was born to William and Lena (Yeske) Lunzman on October 5, 1921 at Bath, SD. He was the oldest of eight children. Most of his growing years and schooling were in Frederick, SD. His mother passed away while he was still in high school.

Harold and Lydia Bellikka were united in marriage on November 22, 1945 in Gackle, ND. They lived in Frederick and Hecla, SD until 1950 when they moved to Lydia's parents' homestead farm near Fredonia, ND. In 1964, they moved into Gackle, ND. Lydia passed away in April of 2012.

Harold was a member of the Old Apostolic Lutheran Church of rural Gackle, ND.

Harold drove school bus for several years and was also employed as a mechanic for Schaffer Service and Twin Ford in Gackle. Later, he worked at Tri-County Elevator in Gackle where he retired after 28 years.

He was a member of the Gackle Volunteer Fire Dept. for many years.

He entered the Gackle Care Center in 2014. In 2015, he became a resident of Ave Maria Village in Jamestown, ND.

He was preceded in death by his parents; his wife, Lydia; a son, Cornel; a sister, Evelyn; three brothers, Vernon, Merlin and Wayne.

Funeral Service will be at 11:00 AM Saturday, February 20, 2016 in the Old Apostolic Lutheran Church south of Gackle, ND with Daryl Bellikka and Andy Hendrickson officiating.

Interment- Homola Cemetery SW of Gackle, ND in the spring.

The family requests no flowers.

To order memorial trees or send flowers to the family in memory of Harold Lunzman, please visit our flower store.
Send a Sympathy Card