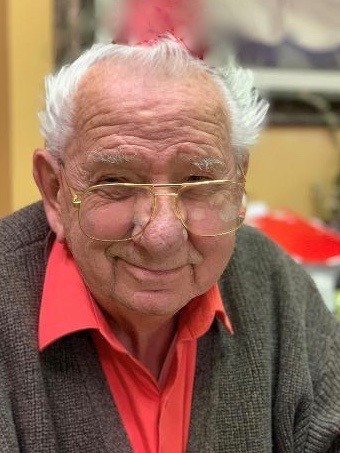 Gerald Wilbert Carlson (Jerry) entered this world on May 23, 1929 in a Doctor’s office in what is now the upstairs of Jerry’s Furniture in Jamestown, ND.  He was born to Joseph and Lydia (Gaier) Carlson. After struggling with heart disease and diabetes for many years, he left us  peacefully on June 7th, 2020 in that same location.

Jerry is well known in the community for being the patriarch of the Carlson family, striving to maintain the traditions of his generation and preserving family bonds. His businesses, highlighted by Jerry’s Furniture, were all family businesses that anchored his passion for family and social relations with the greater community. He sold furniture but people would come from miles around to have conversations and share in his hospitality. He was a maven and icon for Jamestown business as he was active in many organizations throughout his lifetime which ranged from supporting the mission of St. Johns Academy/St. James Parish to his role on the Hockey board and Figure skating Clubs (former President) where he assisted in helping build the first indoor winter sport facility in the town (John L. Wilson Arena).

He started farming at 16, and moved alone to Jamestown from the farm North of Cleveland, ND, to finish high school and then briefly attended Jamestown College hoping to pursue dentistry. At 18 he started drilling water wells (Carlson Drilling) with his cousin Wilmar Weber.  Jerry’s brother-in-law, John Ganser (Big John) was the main well driller and the drilling business continued until John’s retirement. In 1950 he joined the U.S. Navy as a Seaman. He was stationed in the Great Lakes where he boxed and learned several trades including cooking and electrical skills.  After the Navy, he spent a winter in Glendive, Montana working on oil rigs (hauled dyno-mite), and another winter picking oranges in Florida. In 1958 he started J&J Sales with his uncle Jim Gaier; two years later his father Joe bought out Jim. Jerry was a true salesman. He sold waterless cookware door to door, Kirby vacuums, cars, mobile homes, snowmobiles (and had an AMF racing team) and furniture. Bernie Wojick and Bob Ganser were some of his key employees in many of these endeavors. Later J&J became J&A (Jerry and Annette) Distribution and Jerry’s Furniture.

Jerry married his beautiful young bride, Annette Ganser on September 22, 1956 in Medina, ND who he met while roller-skating. .  They had 6 children, all starting with the letter “J”.  The initial plan was to have 6 more with names starting with “A”.  They quit at six.

Although definitely not retiring, they moved to town and resided above Jerry’s Furniture in the old White Drug building.  They continued to garden in the alley.  While he had grown over 100 tomato plants in the country to share with friends, he scaled back to two and some rose bushes.  He especially loved dark red hybrid tea roses. In 2017 he received a beautification award from the downtowners.  They celebrated their 60th Wedding Anniversary in 2017 with friends and relatives with a dinner and dancing to the Julie Lee band hosted by their children

Dad said cats have nine lives, he thinks he’s had 20.  He remembers one year he had more than 40 speeding tickets…no, he said, maybe more.   He enjoyed hunting all kinds of animals but was a bit colorblind when hunting pheasants.  He liked fishing local lakes when they were biting, and even caught and had stuffed a sailfish when in Mexico.  Jerry and Annette enjoyed traveling with the Artcraft mobile home group and visiting relatives.  Black Jack was his favorite card game although he enjoyed playing all kinds of cards, starting with poker at age 4.  Games of pinochle were mainstays at family events as Jerry enjoyed teaching people the art of being a good partner, and quickly expected you to play well if you were on his team. He also enjoyed delivering beds to businesses and stopping at casinos along the way.  They liked to meet Al and Barb Huseth at Treasure Island.

Jerry was quite a character.  There are so many great Jerry stories.  Please visit Haut Funeral to share your memories and reminisce. Cremation has taken place and due to Covid19 restrictions, a memorial will be held on Monday June 15th at the Catholic Church; with a social reception at the funeral home Celebration of Life Center, following the burial, to allow for people to share stories and memories of Jerry. Best practices, masks, and social distancing are requested as the family hopes many can join them in celebrating his life.

To order memorial trees or send flowers to the family in memory of Gerald Carlson, please visit our flower store.
Send a Sympathy Card