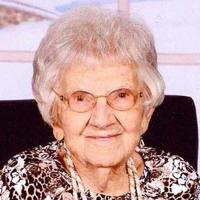 Esther Caroline Schlecht was born November 21, 1915 at the family farm home north of Fredonia, ND, the daughter of Michael and Elizabeth (Dalke) Schlecht. She attended the local rural school by Gackle where she received her elementary education and grew to womanhood.

She and John Fiechtner were married July 11, 1935 in Lehr, ND. They made their home 14 miles north of Lehr where they farmed. Following the death of her husband in 1969 she continued to live on the farm until September 1969 when she moved to Wishek where she worked at the nursing home for several years. In 1979 she retired and lived at the Wishek Home apartments.

She was a member of St. Luke’s Lutheran Church, German Ladies Aid, Senior Center, American Legion Auxiliary and the Eagles Auxiliary. She enjoyed doing crafts, quilting, puzzles, cards and watching the MN Twins games. She also enjoyed socializing with her many friends and the people she loved.

She was preceded in death by her parents, her husband, 1 daughter Marlys, in infancy, 5 brothers, Godhielf, John, Raymond, Roy, Victor, and 1 sister, Elizabeth.