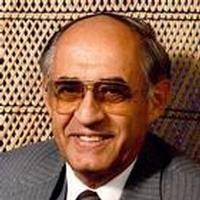 Ervin Schauer was born April 6, 1928 at Wishek, ND the son of John Schauer and Christina (Kessel) Schauer. He received his elementary education in the local rural school and grew to manhood in the vicinity where he helped on the family farm.

He and Magdalina Speidel where married April 12, 1953 at Gackle, ND. They made their home in Gackle where he worked as a Mechanic for Remboldt Implement. Magdalina passed away in Dec. of 1962. He continued to work at Remboldts until November of 1964.

He and Virginia Buck Fandrich were married in February of 1964. They made their home in Wishek where he worked for Skeldam and Kemmeth Ford as a mechanic until May of 1966 when they moved to Medina and worked for Wingere & Bryant Implement until 1969. Then as a School custodian for 1970-1971. They moved to Jamestown where he worked for Farmers Union until 1988 when he retired due to ill health. In 1989 they moved to Phoenix and returned to Jamestown in 2000. Virginia passed away October 15, 2000.

In Dec. 2011 Ervin moved to Rock of Ages where he loved to play Bingo and watching game shows and sports. He recently entered Eventide.

He was a member of the First Assembly of God Church in Jamestown.

He was preceded in death by his parents, wives, 1stepson Darvin, 10 brothers and 4 sisters, 1 great granddaughter, Kaitlyn.

Memorial service will be at 11:00 AM Saturday in the First Assembly of God Church in Jamestown, ND with Rev. Darrell Losing and Rev. Jeff Wiedenmeyer, officiating.

Interment will take place in June at the Gackle Cemetery, Gackle, ND.

To order memorial trees or send flowers to the family in memory of Ervin Schauer, please visit our flower store.