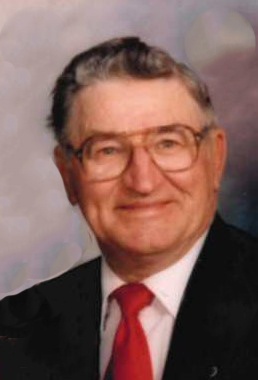 Elmer Zenker was born December 23, 1928 in Jamestown, ND the son of William Jr. and Lydia (Schultes) Zenker.  He received his elementary education in Gackle and graduated from the Gackle High School in 1947.   He then attended the Dakota Business School in Fargo, ND from 1948-1949.

He entered the United States Army on January 13, 1951 at Fargo, ND.  He served in Japan and Korea and was discharged December 10, 1952 at Ft Lewis, WA with the rank of PFC.  He returned to Gackle and was employed at Remboldt Implement.  Elmer was a substitute school bus driver and worked for the Gackle Co-op for a few years.  For the majority of his life, he was a farmer. Even after retirement he helped his son Jeff on the farm whenever possible.

He and Velva Vesta Flaig were married on December 23, 1952 at Jamestown, ND.

They made their home on a farm southwest of Gackle.  In 1993 they moved into town. Following the death of his wife August 8, 2012 he continued to reside in Gackle until 2018 when he entered the Veterans Home in Lisbon, ND.

He was a member of the Emmanuel Lutheran Church in Gackle, ND, American Legion Mayer-Morlock Post 250 in Gackle.  Elmer enjoyed fishing, watching baseball games, and woodworking. Plus he was known to be quite a talker!

He was preceded in death by his parents, wife, 3 sisters: Hertha, Eugenia (Ruff), and Violet (Geinger); 3 brothers, Harold, Jake and Edmund.

The recording of the service will be available Saturday morning.

To order memorial trees or send flowers to the family in memory of Elmer Zenker, please visit our flower store.