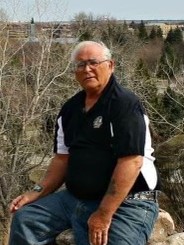 Ed was born July 23, 1949 at Jamestown, ND the son of Edwin H. and Dona (Wahl) Holzworth. He attended Washington elementary school and graduated from Jamestown High School in 1967.

He was married from 1971 – 1979 and is survived by 2 step children, Dale and Julie Spencer, and 1 daughter DeAnna Keller.

He and Mary Schaffer were married August 1, 1981 at Jamestown. They made their home in Jamestown. He proudly served the community of Jamestown as police officer Sgt Holzworth #212 for nearly 40 years.

Ed was a member of the Disabled American Veterans.

He was preceded in death by his parents and brother Bob.

To order memorial trees or send flowers to the family in memory of Edwin E. Holzworth, please visit our flower store.