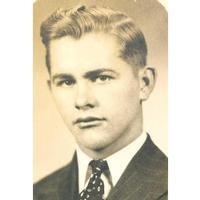 Edwin Evenrud, 90, Jamestown, ND, went to be with the L-rd Jesus on Monday evening, April 10, 2017, at the beginning of the Passover season, at the Jamestown Regional Medical Center in Jamestown, ND.

Ed Evenrud was born December 27, 1926, and grew up in the Balfour area, the son of Otto and Dorothea (Garlie) Evenrud. He received his elementary education at Balfour public school. Due to a small graduating class, a result of WWII, Ed graduated from Drake High School in 1945. He entered the United States Navy, October 5, 1945. He was discharged September 27, 1949, and married Betty Jean Burnett. In 1951, Ed and Betty went to a Billy Graham Crusade in Chicago, and from that time on, Ed became a follower of Jesus. He attended Commercial Trades school in Chicago (what he called radio school), Multnomah Bible College, and crisscrossed the U.S. several times with his family, ending up in Seattle. Ed worked for Boeing as a Missile Tech from 1955-1972 and by this time, they had 10 children. They left for Brazil with the five younger children to become missionaries, adopted two children but Betty passed away shortly afterwards, in 1978.

Ed and Vera Süffert met at a Missionary Conference and were married August 2, 1986 in Brazil. They had two children and Vera helped to raise the two younger children who were nine and ten at the time. In 1996, they moved to southern California where they resided until 2006, and when Ed was 80, they moved to Minot, ND. Because of the flood, they lost their home and moved to Jamestown, ND, where they retired.

For the past 20 years of his life Edwin was a member of Kehilat Ariel Messianic Synagogue in San Diego, California. While he was living in Jamestown, ND, he regularly attended the First Nazarene Church (Primera Iglesia del Nazareno) and New Life Church, as well.

He also was a member of the American Legion Post # 270 in Butte, ND. His family declares he was the greatest husband, father and grandfather and will be greatly missed.

Funeral Service will be at 9:00 AM, Friday morning, April 14, 2017, at the First Church of the Nazarene in Jamestown, ND, with pastors, Rev. Matt Zimmer and Jesus Molina officiating.

Interment will take place at 2:00 PM, Friday afternoon, at the ND Veterans Cemetery in Mandan, ND.

IN LIEU OF FLOWERS donations may be sent to:

Donations can be made online at http://jamestownndnaz.org/donate in the Hispanic Ministry section (line 5).