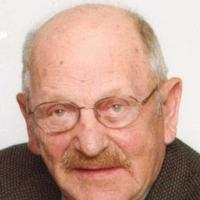 Jack was born September 12, 1927 at Streeter, ND, the son of John and Katie (Klundt) Nienow. He attended the local rural school where he received his elementary education and grew to manhood in the area.

He entered the United States Marine Corps December 5, 1951 at Minneapolis, MN. He served in San Diego, CA and Korea for 11 months as a radio operator. Jack was discharged December 1, 1953 at San Francisco with the rank of Corporal.

Jack and Verna Bonnet were married November 4, 1954 at Streeter, ND. They made their home on the farm NW of Streeter where they owned and operated a stock and dairy farm. In 1980 they were awarded the Merit for F.H.A. Family of the Year in Kidder County. In 2001 they sold their farm to their son and moved into Gackle, ND.

He was a member of the St. Luke Lutheran Church in Streeter. He was also a member of the American Legion Post #265, and served as Post Adjutant. He was a Director of the Streeter Co-op Oil, and also served on the Graf Township Board.

He was preceded in death by his parents, his wife, Verna, 1 son, Steven, 1 granddaughter, DeAnna Nienow and 1 brother, Vernon.