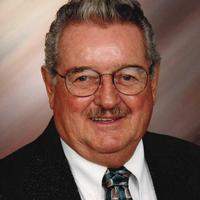 Don Loh was born May 30, 1931 at Dickinson, ND the son of Carl Loh and Susanna (Seiler) Loh. He received his elementary education in the local schools graduating from the Regent High School in 1949. Don took great pride in the fact that he graduated in the top four of his class, and often a period of time would pass before he shared the fact that there were only four people in his senior class.

He and Delores Gion were married June 30, 1953 at St. Michael's Catholic Church rural Regent, ND. Don was employed with the First State Bank of Regent for 10 years and then joined the Commercial Bank of Mott until his retirement in 1993. He sold crop insurance for many years, clerked auction sales, and prepared people’s taxes.

Following the death of his wife Delores in May of 1998 he continued to reside in Regent until he moved to Port Washington, WI and then Detroit Lakes, MN to be closer to his family. He lived with the Champa Family for many years, and they can attest to a his fascinating gadget collection. He had a huge heart and opened his home to anyone. Don always had a story or two to share, and he also had many German expressions that he used. His grandchildren picked up on a lot of his German sayings, much to their parents’ chagrin. In short, Don made people smile and laugh. He taught his family to not take life too seriously, and he also taught them to be humble and grateful for all they’ve been given.

He was a member of the St. Henry’s Catholic Church in Regent, ND. He sang in the Church Choir for over 40 years. He was a member of the German Hungarian Club and the Knights of Columbus. Don had many passions: cars, antiques, and gadgets of any kind. Don, being a very charismatic person, had many customers who spoke of their affection for him over the years. Don and Dee worked together at the bank, and they also sang together for many years. This duo sang for hundreds of weddings, funerals, and other special celebrations over the years. Don remembers them even winning some contests and awards. Don was often asked to be the Master of Ceremonies at special events.

He was preceded in death by his parents, wife Delores, son Loren, one sister Margaret and one brother Joe.