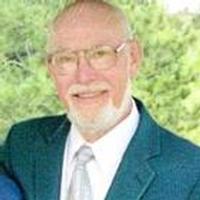 Dennis was born March 8, 1944 at Jamestown, ND, the son of Edward and Marie (Kracht) Krueger. He attended school at Wimbledon and graduated in 1962. He then attended Brown's Announcing College in Chicago, IL.

He and Marcia Nogosek were married November 26, 1965 at Concordia Lutheran Church in Jamestown. They made their home in Jamestown where he owned and operated TJ's Package Store with his brother Milt. They moved to Strongsville, OH where he sold medical equipment to area hospitals until moving to Crookston, MN where he sold life insurance. They moved back to Jamestown where he sold cars for Lloyd's Motors and drove truck for many years for Mayer Truck Line until becoming disabled. He entered Eventide January 26, 2006.

He was a member of the Eagles, VFW and loved all sports, especially playing softball on Randy's Old Pro. He was a huge Denver Broncos fan, also a fan of the Jamestown Blue Jays and Jamestown Jimmies.

He was preceded in death by his parents, 1 son, Deano, and 3 brothers, Albert, Willie and Milton.

To order memorial trees or send flowers to the family in memory of Dennis L. Krueger, please visit our flower store.
Send a Sympathy Card