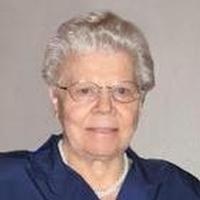 Cordelia Myrtle Steyer was born to Henry P. Steyer and Emma (Reiter) Steyer on December 13, 1921. She was the fifth of ten children and lived on the family farm in Slope County north of Bowman, ND. She was very involved with 4-H and won several awards, including a trip to Chicago to the National Convention. She received her education at the nearby County school, and with the help of correspondence courses, was the first in her family to complete high school in 1940.

She helped on the family farm until December 1941 when she went to Hettinger, ND for employment. There she met J. Hilton Larson; they were married on August 26, 1943. They developed their own farm three miles northeast of Hettinger. She was an officeholder in Duck Creek Township and in the Farmers Telephone Co. for many years. Cordy was an active member in the Hettinger Assembly of God church where she served as a Sunday School teacher and Superintendent and in Women’s Ministry.

In 1979, she and Hilton purchased a winter home in Apache Junction, AZ. J. Hilton Larson passed away May 13, 1982. She continued to live on the farm by Hettinger and wintered in AZ. She thoroughly enjoyed her AZ winters and made many new friends in her neighborhood and church there.

On November 1, 1986 Cordy married Theodore “Ted” Wegner; they made their home in Jamestown, ND and wintered in AZ. She was an active member of First Assembly of God and the Gideons International Auxiliary in Jamestown. After Ted’s death on December 19, 1998, she continued to live in Jamestown and Apache Junction, AZ until she moved into Eventide in September 2005.

Cordy loved the outdoors where she gardened, helped on the farm with the livestock and field work, enjoyed horseback riding and deer hunting. She was also a wonderful cook and homemaker; she is remembered for grinding wheat grown on the farm to make her whole wheat bread. She loved social gatherings with family, friends, and neighbors. Reading was a favorite hobby. Cordy leaves a legacy of hard work, generosity, love for family and friends, and an exemplary Christian commitment.

Visitation – 1-8 Sunday at the Funeral Home in Jamestown, ND.

To order memorial trees or send flowers to the family in memory of Cordelia M Larson-Wegner, please visit our flower store.