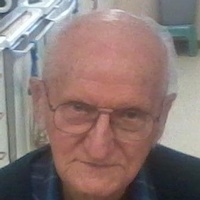 Clarence was born October 13, 1924 at Cleveland, ND to Christian and Sophie (Kurtz) Horsted. He grew up on the family farm attending school and graduating from Cleveland High School in 1942. He continued to help out on the farm until 1950 when he joined the US Army. He served over in Germany until he was honorably discharged in 1950 with the rank of PFC.

He and Elsa Stroh were marred in 1957 at Cleveland, ND. They made their home on the family farm east of Jamestown, farming until 1975. They moved to Valley City where he drove truck for La Farge Cement until his retirement in 1999. After the passing of his wife, he continued to reside in Valley City until moving to Jamestown in 2010.

Clarence loved to make music with his family. He enjoyed going down to the Eagles Club for the dances; also liked playing cards and Bingo. He was very social.

He was preceded in death by his wife, parents and two siblings, Rodney and LuVerne.

Interment will be at Highland Home Cemetery - Jamestown, ND