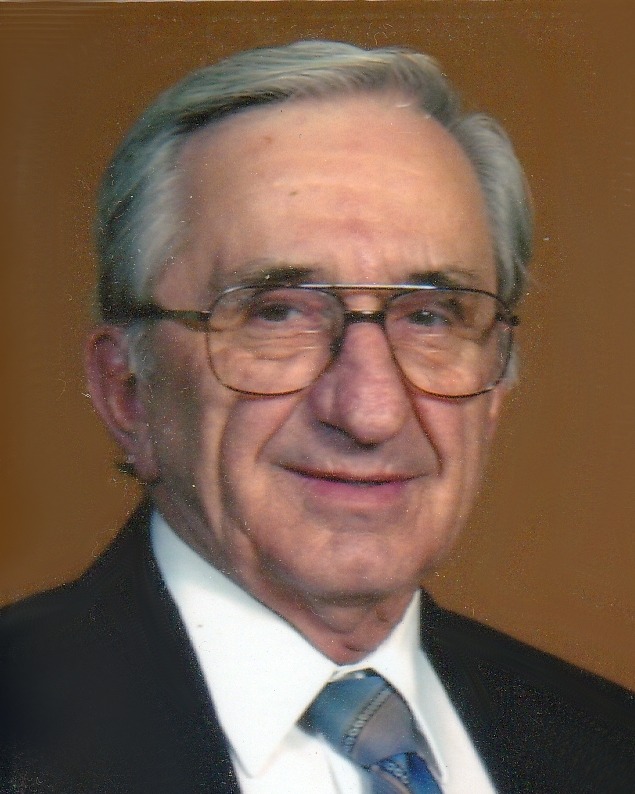 Berthold Spitzer, 92, Napoleon, ND died Wednesday night, November 23, 2022 at the Napoleon Care Center.  He had struggled with COPD for several years but passed away peacefully.

Bert was born December 31, 1929, the son of Ludwig and Emma (Dammel) Spitzer and grew up on the family farm southwest of Streeter.  He graduated from Napoleon High School in 1948, attended college at Minot State, and taught rural school for several years prior to his military service.  Bert entered the Army in December of 1951 and served in Whittier, AK during the Korean Conflict before being discharged in December of 1953.  He was fond of recounting his time in Alaska where he was photographer and editor of the camp newspaper; he stayed in contact with many of his army buddies for many years afterward.

Bert and his long-time sweetheart Agnes Becker were married on December 27, 1953 at Streeter, ND and made their home on the family farm.  Their son Mark was born on September 6, 1954 and Bruce on Septermber 29, 1956.  In the 1960's they took many family trips around the country.

In 1964 Bert built a new home at the family farm, with the help of many neighbors and friends.  The Flat Pioneer Farm also received the Logan County Soil Conservation award at this time.  He was active in many local organizations including the American Legion, Lions, Eagles, Streeter Co-op, Logan County Farm Bureau, the Salt Lake Board, and other organizations.

He was a church elder at the United Church of Christ Reformed and also served as Sunday School Superintendent.  One of the most valuable services he rendered was founding and leading the L-K Wagonwheel 4-H club for twenty years; he helped scores of young boys learn and grow on the prairie, and many of us have fond memories of those monthly meetings.  He raised polled Shorthorn cattle for many years and sponsored the "Bert's Shorthorns" bowling team, a talented group who took home many trophies.

Bert and Agnes were avid antique collectors and restored many priceless pieces over the years, as their home attests.  He was active in the Republican Party and served as a delegate at state conventions.  In 1980 he ran as a candidate on the Republican ticket for the North Dakota State House of Representatives, but failed to win office.  He continued improvements on the family farm with the addition of many shelter belts and in the 1990's added center-pivot irrigation to the home property.  He helped neighbors and friends throughout his life whenever help was needed.

When Agnes passed away in 1992, he and Bruce continued their partnership on the Flat Pioneer Farm.  Bert became active with the BE (Beginning Experience) in Jamestown, helping with planning and organizing their activities.  During this time, he and Evangeline (Woehl/Ketterling/Zimmerman) became close companions, having both lost spouses.  Then on Valentine's Day, February 14, 1998, they were married at the Prairie Meadows Church south of Dawson, ND on property owned by Selmer Spitzer.

For the next 20 years Bert and Vangie continued living on the family farm during the summer months while wintering in Mesa, AZ.  They had many good friends and good times at the Mesa Good Life community and were happy to escape the North Dakota winters.  Bert enjoyed spending time with his new step-children and step-grandchildren, and they returned his affection many times over.

In recent years Bert and Vangie left the farm and moved to a home in Napoleon.  In 2020 when they needed more assistance in daily matters they moved into an Assisted Living apartment at the Napoleon Care Center.  Over the next two years, each of them required more care and eventually they moved into the skilled care section of the Center.

Vangie passed away on Nov. 3, 2022 which struck Bert hard, and the next day he was hospitalized with pneumonia.  After two weeks in St. Alexius in Bismarck he returned to Napoleon Care Center, though only briefly as he passed away within the week.

Bruce and Mark would especially like to extend their gratitude to all who visited with him in the past month.  These visits were very beneficial to his health and spirits, and in this regard, special thanks to Leonard and Joanne Becker who spent several days with him in Bismarck.

Bert is survived by his two sons, Mark and Bruce, and one brother, Selmer.  He is also survived by brothers-in-law and sisters-in law, Phyllis Spitzer, Leonard and Joanne Becker, Dianne Becker, DeLane Woehl, Eileen Yenney, Diana Veil, Jim and Sue Woehl, and many nieces and nephews.  Also his six Ketterling step-children, Keith, Karen, Kathy, Kristy, Kim and Kent and their families.

He was preceded in death by his parents, his wife, Agnes (1992) and wife, Vangie (2022); one sister, Elsie Draegor and brother-in-law Dwane Draegor. He was also preceded by many Becker in-law family members.

Bert will be remembered as a good man.  In his 92 years, no one ever had a bad word to say of him.  At sales and auctions, if a friend or relative was interested in property or machinery that he had his eye on, he would forgo bidding against them; some might say that was bad business sense, but it was a sure sign of a great neighbor.  The world is poorer with his absence.

Both services will be recorded and uploaded below.

To order memorial trees or send flowers to the family in memory of Berthold Spitzer, please visit our flower store.