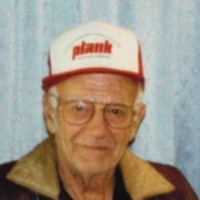 Albert was born May 30, 1921 at Lehr, ND, the son of John and Magdalena (Becker) Kauk. He received his elementary in the local rural school and helped on the family farm.

He entered the United States Army at Fort Snelling, January 24, 1945 and was stationed in Okinawa, Japan. He was discharged at Fort Lewis, WA with the rank of PFC.

Albert lived in ND and CA where he learned many trades and worked as a machinist. He also worked in Libya for several years.

He and Vermonia Aipperspach were married in 1948. They later divorced.

He and Alzina Kauk were married at Reno, NV and made their hon at Richman, CA. In 1966 they moved to Streeter where they have resided.

He was preceded in death by his parents, both wives, 4 brothers, Emil, Art, Barney and Harry, 3 sisters, Esther, Hilda and Maggie.